Notes:
The cards for this request were chosen with a purpose.  Tom Brunansky, one of my true childhood heroes, is as automatic as it gets when it comes to signing through the mail, but I was still reluctant to send his minor league card the first time I wrote to him.  I was also kicking myself for not sending his 1982 Topps Traded rookie card.  With my decision to start collecting the 1985 Fleer set, I thought it would be nice to send those three cards together and knock out three major pieces in my Bruno collection.  Success!
Posted by Daniel Cote at 11:46 PM 1 comment: 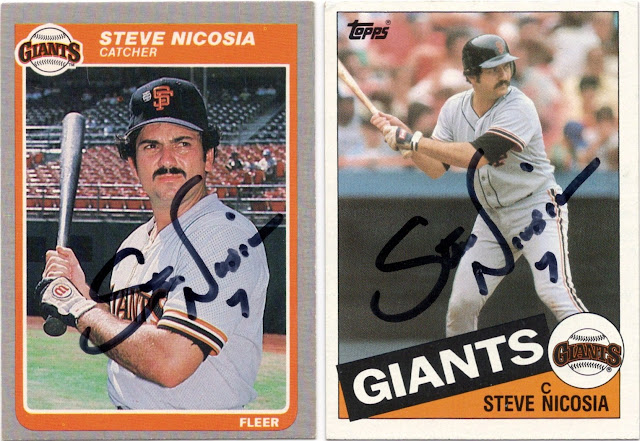 Notes:
Steve Nicosia had a fine rookie season as a platoon catcher on the 1979 "We Are Family" Pittsburgh Pirates championship squad.  He was a fine defensive catcher, but he couldn't maintain the offensive production of his rookie year and two years later he lost any chance at the starting job when the Pirates called up Tony Pena.  Nicosia did have one more good year left in his bat.  He hit .303 in a part-time role for the 1984 Giants.  He scuffled again while splitting 1985 between the Expos and Blue Jays and would not return to the majors.
Posted by Daniel Cote at 11:03 PM No comments: 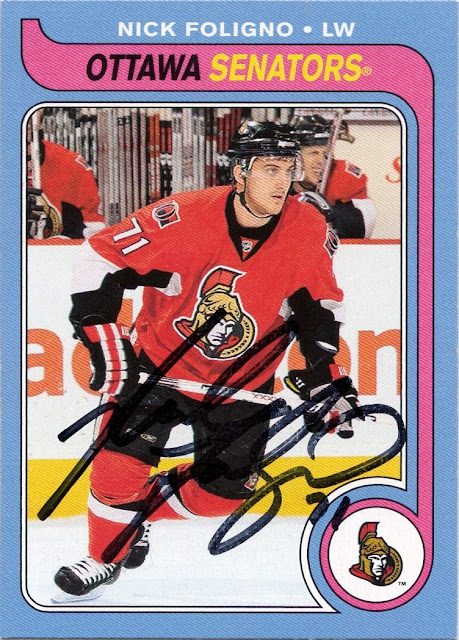 Notes:
Nick Foligno just wrapped up his fourth full season for the surprising Ottawa Senators, and it was a bit of a breakthrough for the former first round pick.  He brought his game to a new level of physicality, more than doubling his previous career high with 124 penalty minutes.  The added intensity helped his offense, too, as he posted career highs of 32 assists and 47 points.
Posted by Daniel Cote at 1:42 AM No comments: 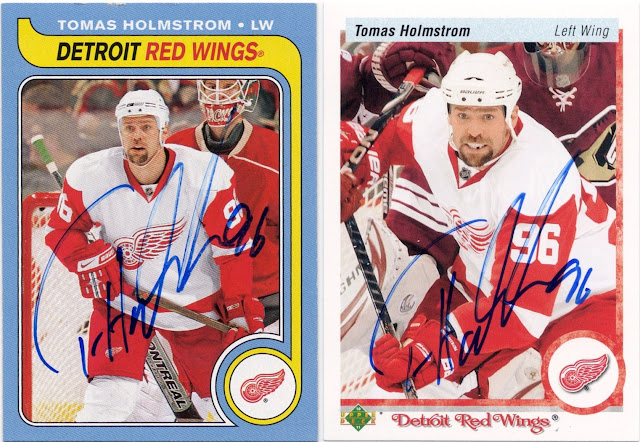 Notes:
Tomas Holmstrom is a very good hockey player who has become a legend in Detroit thanks to his longevity and the team's prosperity.  In his 15 NHL seasons (all with the Red Wings), he has won the Stanley Cup four times.  He's now 39 years old and while his production has started to decline, he's still very capable of scoring 15-20 goals over a full season.  And he's always been a playoff stud.
Posted by Daniel Cote at 1:21 AM No comments: 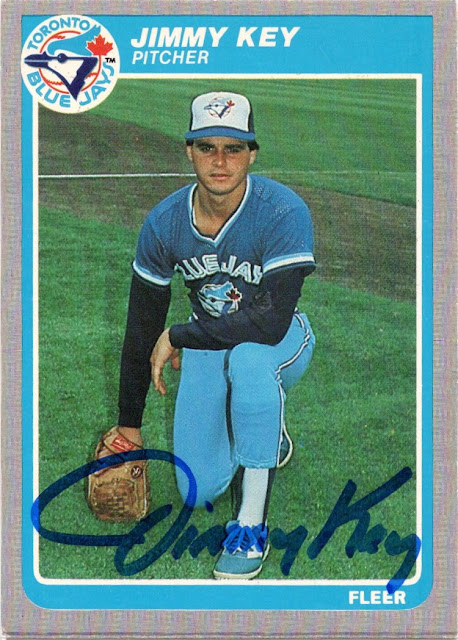 Notes:
I don't particularly enjoy double-dipping and sending second or third requests to a player who I've already successfully received a TTM autograph from, but when one starts a new project as I have, it becomes necessity.  Jimmy Key has a great signature and is a near-automatic signer, though he does have a policy of only signing one item per request.  After getting him on a 1987 Topps card a little more than a year ago, I have now added him to my new 1985 Fleer set.
Posted by Daniel Cote at 1:05 AM No comments: 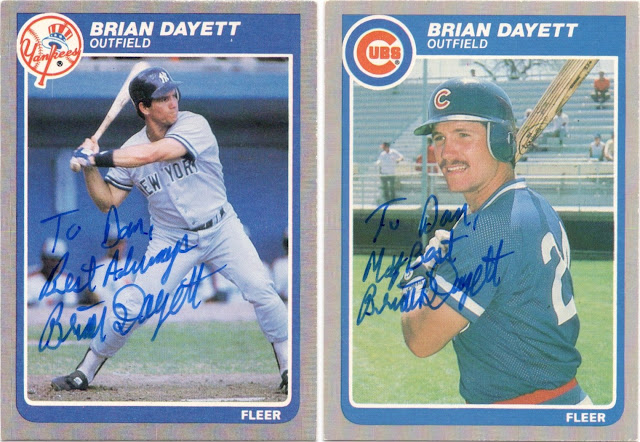 Notes:
While beginning to send out requests for my new 1985 Fleer set project, I've started off by writing to a bunch of former Cubs.  I loved those mid to late '80s Cubs teams.  Don't get me wrong, the Twins were always number one in my heart, but I grew up on WGN afternoon broadcasts with Harry Caray and Steve Stone.  Harry had a way of turning Wrigley Field into the greatest place in the world, and the lovable cast on the field only helped.

Brian Dayett wasn't one of the Cubs stars.  He was a role player who had some impressive minor league seasons, but he never did win a regular big league role.  I do remember his first home run in a Cubs uniform, though.  It was a pinch hit grand slam, which to that point was one of the coolest things I had ever seen on a baseball diamond.
Posted by Daniel Cote at 12:13 AM No comments: 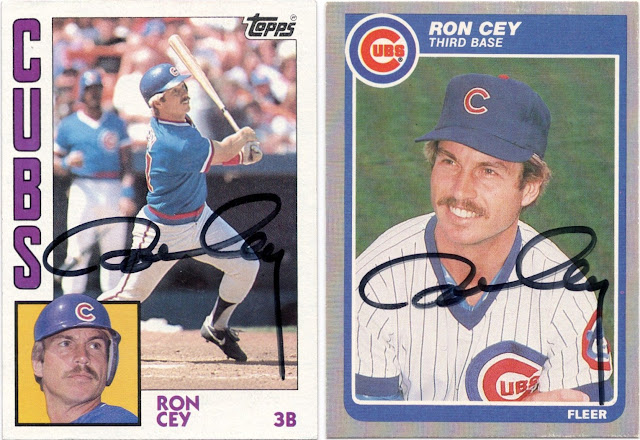 Notes:
As if I don't have enough collections to work on already, I just decided I wanted to go for the 1985 Fleer set.  I just decided it was silly for me to be working on multiple hockey sets and not a single full baseball set.  I chose this because I've always thought it was a cool, underrated design, and because I already have one of the biggest toughies in the Kirby Puckett rookie.  So, the mailing has started.  One of my first requests was my second letter to one of the hobby's great TTM signers, Ron Cey.  "The Penguin" was one of my first returns when I started this hobby and blog two years ago, and he came through again with two more beautiful signatures.
Posted by Daniel Cote at 11:27 PM No comments: 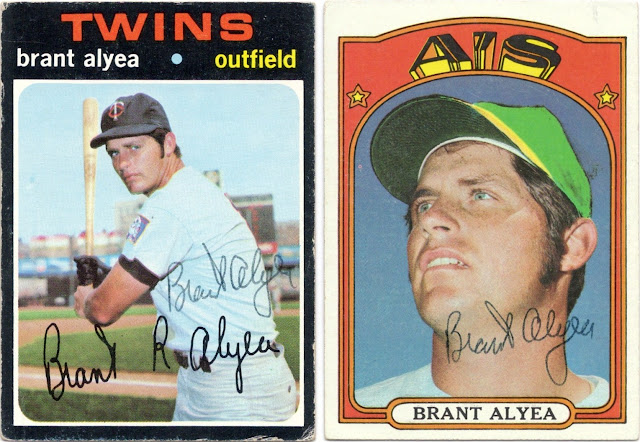 Notes:
One of the great one-year wonders in Twins history, Alyea platooned with Jim Holt in left field for the Twins 1970 AL West Championship club.  In only 290 plate appearances, he hit .291 with 16 home runs and 61 RBI, putting up an OPS of nearly .900.  He dropped off severely in 1971 (.177 with only two homers in 188 plate appearances).  He split 1972 between the Cardinals and A's and didn't play in the majors again after that.
Posted by Daniel Cote at 12:53 AM No comments: 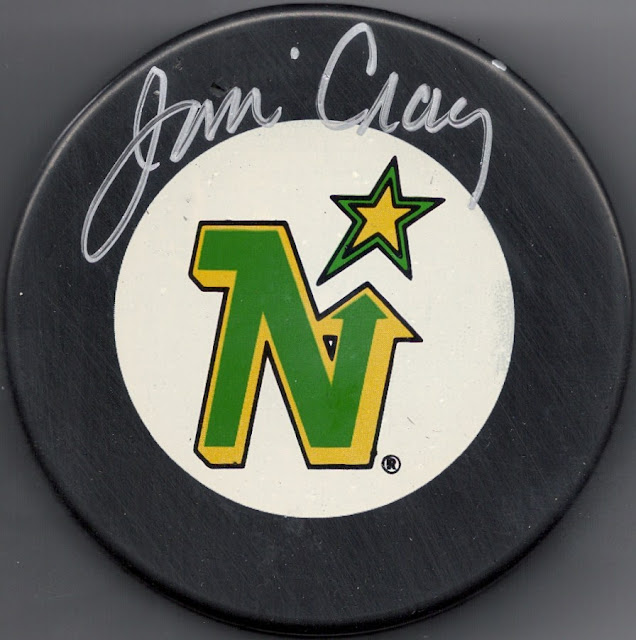 Notes:
In strictly North Stars terms, this is a pretty obscure autograph.  Still, it's one of the coolest early additions to my collection of North Stars pucks.  Jim Craig is, of course, an Olympic legend.  He was the goaltender who beat the Soviets.  As the netminder of the 1980 "Miracle on Ice" team, he became an American legend.  His immortal Olympic performance did not translate to NHL success.  He appeared in 30 NHL games for three different teams from 1980-1984.  The final three were with the North Stars during the 1983-84 season (he went 1-1-0 with a 4.91 Goals Against Average).
Posted by Daniel Cote at 12:50 AM No comments: 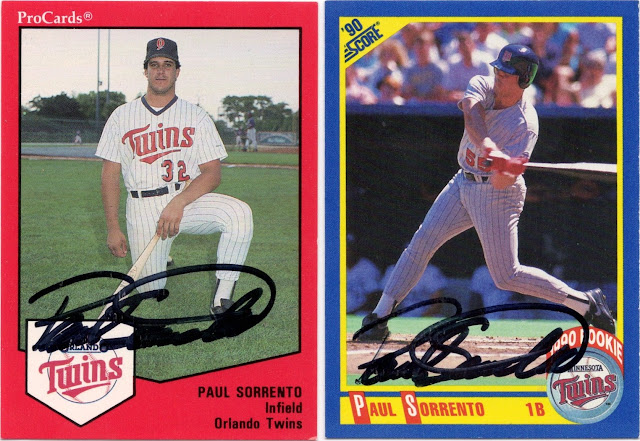 Notes:
Some players simply don't like receiving fan mail at their home.  Take Chili Davis.  I think he was a decent TTM signer throughout his career.  At least I remember getting him through the Twins when I was a kid.  But he built up a solid reputation as a non-signer following his retirement.  That suddenly changed last year when he accepted a position as the hitting coach for the Pawtucket Red Sox.  Suddenly Chili was a signer again, as long as his mail was sent to his team.

It looks like the same thing is happening this year with another former Twins slugger.  Paul Sorrento, who was a power hitting prospect trapped behind Kent Hrbek and the aforementioned Chili Davis on the Twins depth chart, won the World Series as a rookie bench bat in 1991.  Traded to the Indians the next year, he put together a solid career as a part of some of the best offenses of the '90s in Cleveland and Seattle.  His TTM return rate, as reported on SCN, was hovering somewhere around 10% at this time last year.

This spring, he started a new gig as the hitting coach for the Inland Empire 66ers in the Angels' organization.  I noticed a success posted on SCN, so I immediately wrote.  A week later, and I had these two beautifully signed cards.  Through the first month of the season, it looks like Sorrento has turned into an automatic autograph... as long as you send to the team.
Posted by Daniel Cote at 12:13 AM No comments: 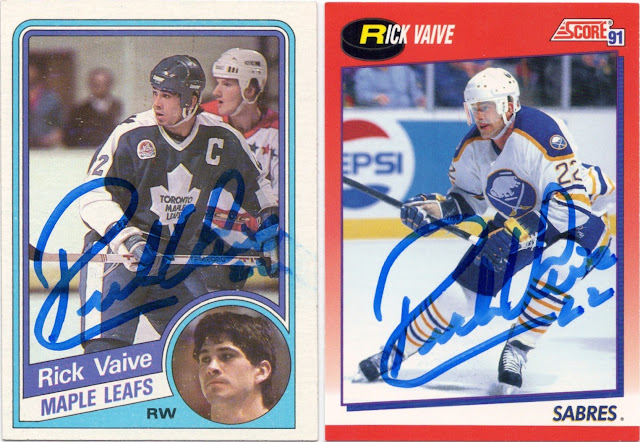 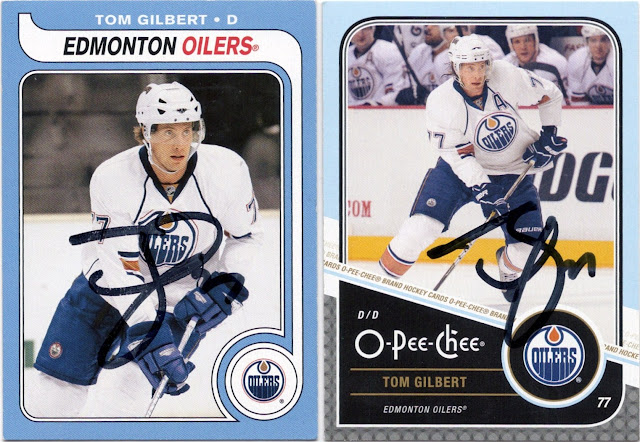 Notes:
This one seemed like a completely lost cause, due to unfortunate timing.  17 days after mailing my request to Edmonton, the Oilers traded the Bloomington, Minnesota native back home to the Wild.  I gave it a couple days, on the off chance Mr. Gilbert may have placed it in a Canadian mailbox on his way out of town, but when nothing showed up I figured I would just try him again next season.  So it's with great surprise (and curiosity) that this arrived, postmarked from St. Paul, but with Canadian postage.  Hey, I'm not complaining!
Posted by Daniel Cote at 10:26 PM No comments: 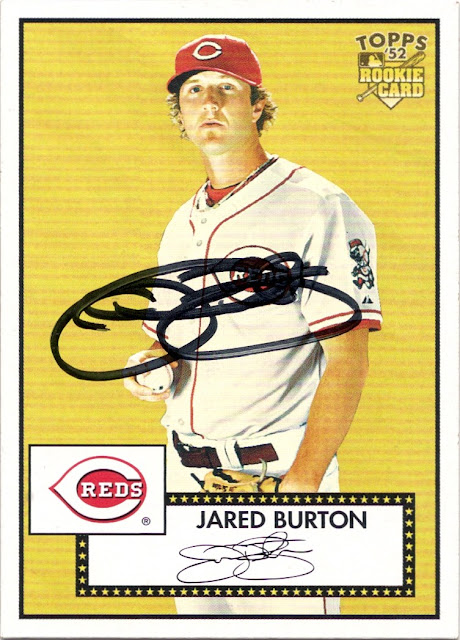 Notes:
Jared Burton is the biggest reclamation project in the Twins' revamped 2012 bullpen.  He had some success in Cincinnati a few years ago and even flashed glimpses of being a potential closer.  Then injuries derailed his career.  Healthy again, he has landed in Minnesota with a chance to become the primary right-handed setup man.  He's been effective so far.  Who knows?  Maybe he still has a chance to become a big league closer.
Posted by Daniel Cote at 10:09 PM No comments: 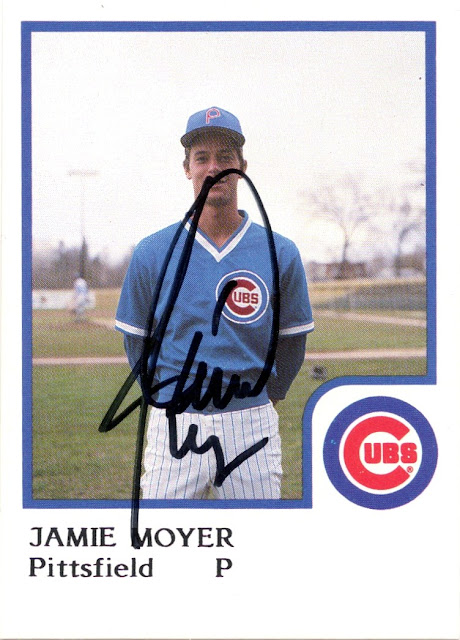 Notes:
Jamie Moyer is back in the big leagues at the age of 49.  A non-roster invitee to spring training by the Colorado Rockies this year, after missing all of last season following Tommy John surgery, Moyer won the fifth and final spot in the Rockies rotation.  If he picks up a win, he will become the oldest pitcher in major league history to do so.  If he's remotely effective this year, he'll probably get a shot with somebody next season to pitch at the age of 50.  Unbelievable.  I've had this Pittsfield Cubs card of him since shortly after it was issued 26 years ago, which was the same season I watched him pitch as a Chicago Cubs rookie on WGN telecasts.  Baseball won't be the same when and if Jamie Moyer ever retires!
Posted by Daniel Cote at 5:38 PM No comments: 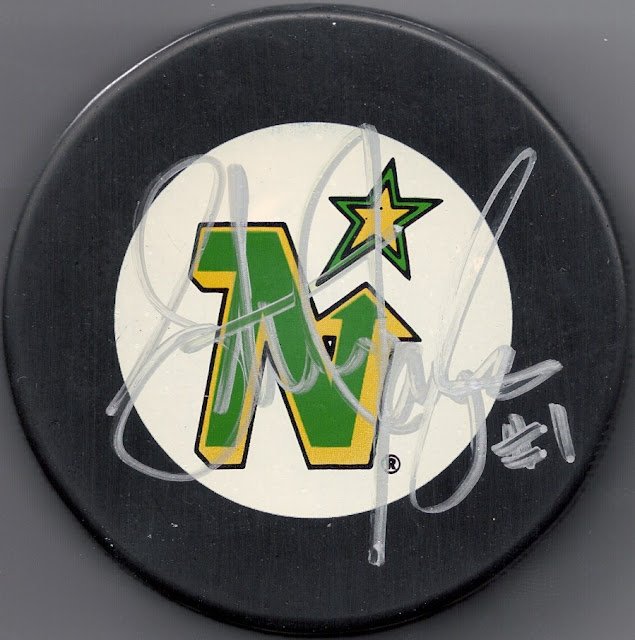 Notes:
My first attempt at sending a hockey puck through the mail is a resounding success!  At the first ever Minnesota North Stars Alumni Reunion in March, I started a brand new collection.  I had individual North Stars logo pucks signed by everybody in attendance.  My puck collection went from zero to 29 in one day.

Steve Janaszak was one of the first ex-North Stars I wanted to try through the mail.  He is a reliable TTM signer, but I had never tried him before as he doesn't have any cards (or, to my knowledge, any photos) appearing in a Stars sweater.  After all, he only played one game in net for the North Stars.

Still, he's a Minnesota hockey legend.  He helped lead the Gophers to the 1979 NCAA Championship.  Following that, he earned a spot on the 1980 US Olympic Team.  As Jim Craig's backup, he was the only member of the Miracle On Ice team who didn't see ice time during the Olympics.  His entire NHL career consisted of three games: the one with the North Stars in 1980 and two with the Colorado Rockies in 1981-82.

He signed the puck in the silver Sharpie I provided, and was kind enough to return the Sharpie with the puck.  Hopefully most future TTM puck signers follow suit!
Posted by Daniel Cote at 1:54 AM No comments: Notes:
Ducks wing Jason Blake has overcome an awful lot over the course of a brilliant career.  The Moorhead, Minnesota native has been an NCAA Champion, NHL All-Star, a 40 goal scorer, and a US Olympian.  He was the recipient of the Bill Masterton Award in 2008 after continuing to play while undergoing treatment for leukemia.  He entered this past season with 473 career points, appearing to be a cinch to surpass the 500 point milestone for his career.  Unfortunately, he suffered a severe cut from a skate above his wrist in October.  By the time his tendon had healed, he missed about three months of the season.  His strong play over the regular season's final weeks bodes well for a return to form next season, even as he approaches age 40.
Posted by Daniel Cote at 1:42 AM No comments: