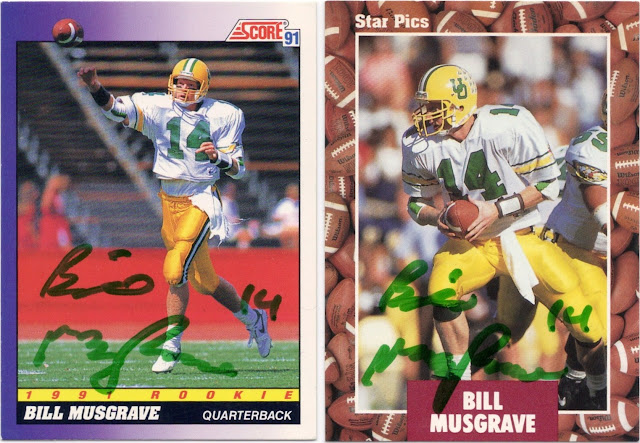 Notes:
Bill Musgrave is the new Offensive Coordinator of the Minnesota Vikings.  He has had a couple OC jobs in the NFL before, with Carolina and Jacksonville, and the results have been less than fruitful.  However, he had a lot of success in the collegiate ranks as coordinator at Virginia, and had a nice run over the past three years with the Atlanta Falcons as the Quarterbacks Coach/Assistant Head Coach, where he was instrumental in developing Matt Ryan.
Posted by Daniel Cote at 1:15 AM No comments: 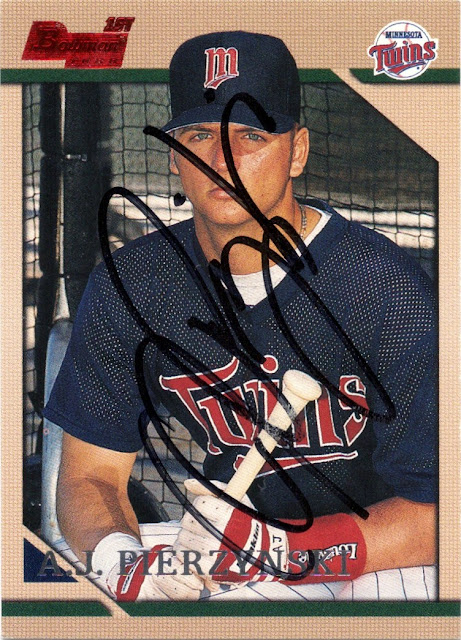 Notes:
Eight years since he last suited up for the Twins, I remain an unapologetic A.J. Pierzynski fan.  I know he has a reputation around the league as an agitator, but the fact that so many Twins fans boo him when the White Sox visit town is embarrassing.  Here's what we know: he played his ass off while in Minnesota, turning himself into an All-Star catcher and perhaps the best clutch hitter on the Twins during the initial franchise renaissance of 2001-2003.  He didn't ask to be traded, but he was due for a big raise in arbitration and the Twins had top prospect Joe Mauer waiting in the wings.  So, A.J. was dealt to the San Francisco Giants for Joe Nathan, Francisco Liriano, and Boof Bonser.  (Nathan is now the Twins all-time leader in saves.  Liriano, while maddeningly inconsistent, has put together two fantastic seasons in 2006 and 2010.  Bonser once started game two of the ALDS for the Twins.)  After a tough season for the Giants, Pierzynski signed with the White Sox (offers were not exactly knocking down his door) and promptly helped lead them to the 2005 World Series.  He has become one of the identifying players of the Ozzie Guillen era on the South Side.  He still plays his ass off and he still comes up with clutch hits.  He's one of the most underrated catchers of his time. 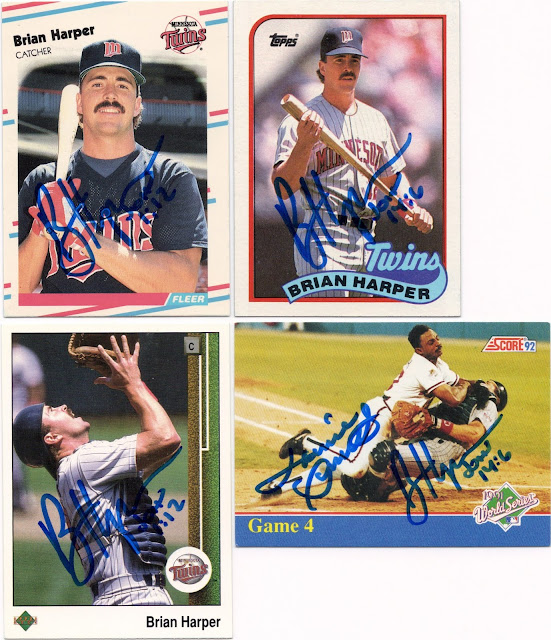 Notes:
Brian Harper could flat out hit, and he may have been the most underrated member of the 1991 World Champion Minnesota Twins.  He was a journeyman and a converted outfielder (he caught all of six major league games in his four previous big league stops before signing a minor league deal with the Twins), the Twins moved him to catcher full-time.  After tearing up AAA Portland in 1988 (.353 average with 13 home runs and a 1.056 OPS in 46 games), he hit .295 for the Twins in 60 games as Tim Laudner's backup.  He took over as the primary catcher the following season and held the job for five years.  He was remarkably consistent, posting averages of .325, .294, .311, .307, and .304.
Posted by Daniel Cote at 1:10 AM No comments: 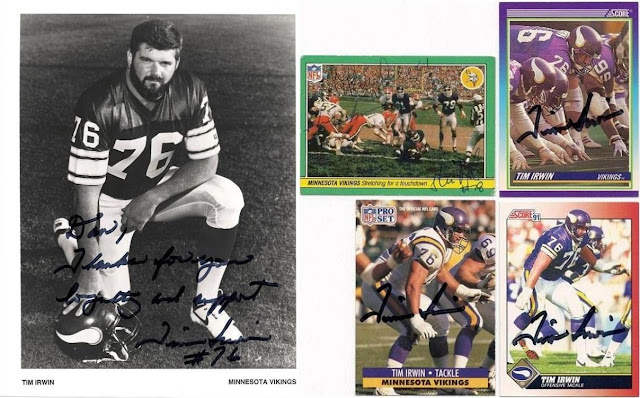 Notes:
Wow, what a return!  I had been meaning to write to Tim Irwin for awhile -- during his career he was known as one of the smartest and classiest players on the Vikings.  After I received this 1984 Fleer Team Action card back from Wes Hamilton (after previously getting it back from Steve Riley), I immediately starting composing my letter to Irwin to try completing the card.  I added a few of his own cards, too.  He neatly signed all his solo cards in black Sharpie and even switched to a ballpoint for the Team Action card, which Hamilton and Riley had both signed in ballpoint.  It definitely would not have mattered to me had Irwin signed that card in Sharpie, too, but the thought to switch instruments to match the others on the card was a very nice touch.  Nicest of all, though, was his inclusion of an 8x10 photo, inscribed "Dan, Thanks for your loyalty and support.  Tim Irwin #76."
Posted by Daniel Cote at 1:59 AM No comments: 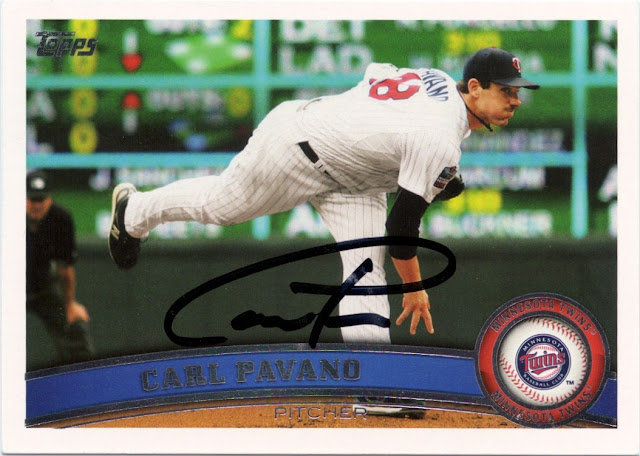 Notes:
I love how since arriving in Minnesota, Carl Pavano has resurrected his career and reinvented himself as an emotional pitching staff leader.  I only wish he still had the stuff to match his charisma.  He pitched out of his mind last year in winning 17 games and becoming the default ace of the Twins staff.  It seemed like a good move to re-sign him this past offseason.  He has come back to earth, but he's still been the most durable and consistent of the Twins' starters in this miserable 2011 season.  I am a little bummed that he kept the 2009 Topps Heritage High Number card I sent.  I love that set (using the 1960 Topps design) and that card would have looked pretty sweet with a signature.  At least he's sporting his 'stache in the 2011 Topps card that he did sign.
Posted by Daniel Cote at 1:43 AM No comments: 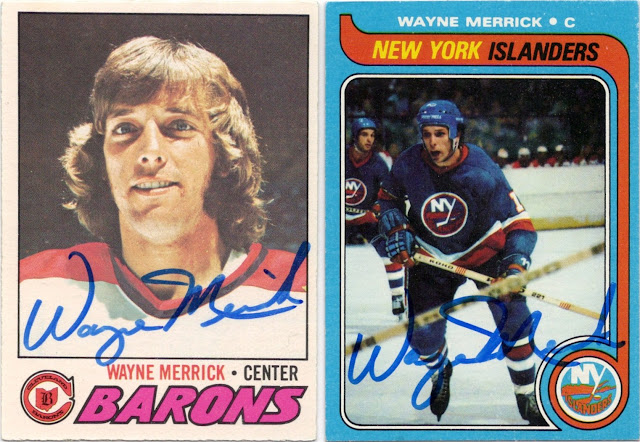 Notes:
Wayne Merrick was a top center for the St. Louis Blues, and then for the doomed California Golden Seals/Cleveland Barons franchise.  During the 1977-78 season, he was dealt to the upstart New York Islanders.  It was there where he would gel with future Hall of Famers Bryan Trottier, Mike Bossy, Denis Potvin, and Clark Gillies, as well as longtime linemates Bob Nystrom and John Tonelli.  Merrick was an integral part of the Islanders' four consecutive Stanley Cups.  His biggest individual moment was scoring the Cup-winning goal against the Minnesota North Stars in game five of the 1981 Finals.
Posted by Daniel Cote at 8:48 AM No comments: 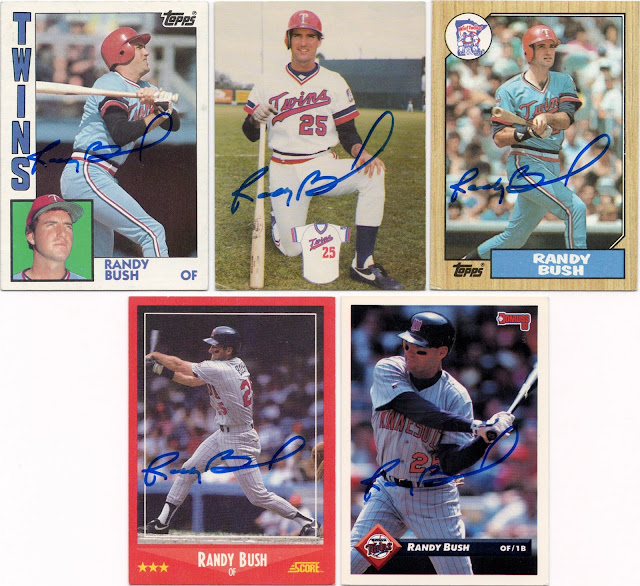 Notes:
Randy Bush is one of my all-time favorite Twins.  From 1982 to 1993 he was a key role player for the club, and one of seven players to be a part of both the 1987 and 1991 World Series squads.  From 1983 to 1989, he was a near-automatic in the lineup against right-handed pitchers.  In fact, here's one of the most ridiculous stats in Twins history: of Bush's 3,045 career at bats, only 100 came against left-handed pitchers.  All 96 of his career home runs came off righties.  By 1991, his role had been essentially reduced to pinch-hitter (albeit one of the top pinch-hitters in baseball).  He'll always be remembered for the "Randy Bush Fan Club" banner that hung in section 212 of the Metrodome, and for his magnificent head-first slide at home plate in game two of the 1987 World Series, where he slid outside the plate, around Tony Pena, and reached out with his left arm to swipe the plate.  He has been the assistant GM of the Chicago Cubs for several years, and was just named their interim GM this weekend following Jim Hendry's dismissal.
Posted by Daniel Cote at 12:47 AM No comments: 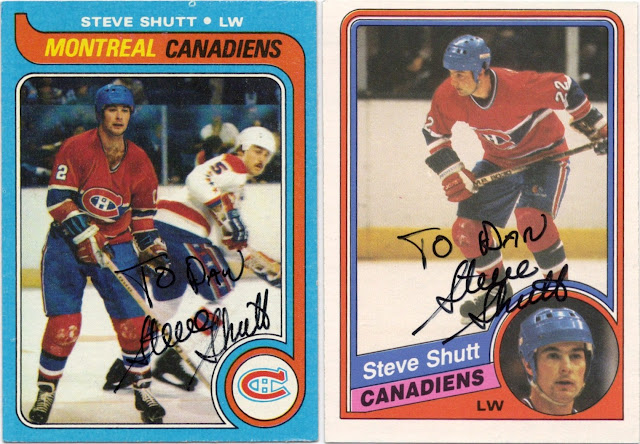 Notes:
Hall of Famer Steve Shutt was the left wing on perhaps the greatest line of the '70s.  Teaming with fellow Hall of Fame legends Guy LaFleur and Jacques Lemaire, the high-scoring Shutt was a key part of the Montreal Canadiens dynasty of that decade.  He set an NHL record for goals scored in a season by a left wing that stood for 16 years, until broken by Luc Robitaille. 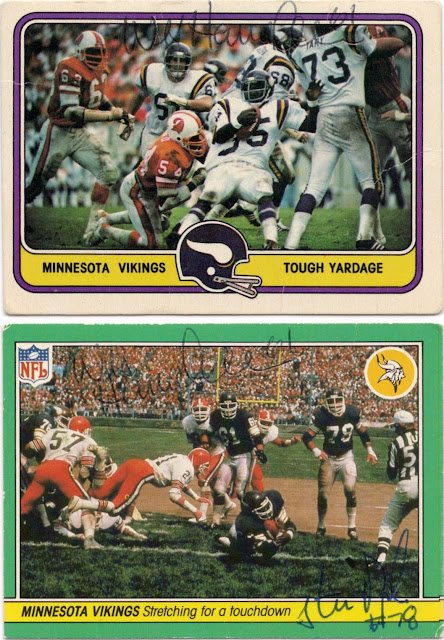 Notes:
Longtime Vikings guard Wes Hamilton is the second signature on my 1984 Fleer Vikings Offense card, following his former linemate Steve Riley.  Like Riley, Hamilton never had his own official Topps football card.  As far as I can tell, though, he never had a team issued card either (if you click the Riley link you'll see that I was able to get him on a Vikings police card).  The Vikings' 1976 third round draft pick played nine NFL seasons (all in purple) and was the starting right guard from 1978 through 1983.  His son Ben was a legend at the University of Minnesota who went on to a solid ten year career with the Denver Broncos before retiring after last season.  As for this return, I'll probably keep the 1981 card in my collection solely signed by Hamilton.  The '84 card will soon be off to #76 Tim Irwin.
Posted by Daniel Cote at 1:37 PM No comments:

Notes:
Chris Speier was my introduction to the trading deadline.  As I've noted a few times on this blog and others, the 1984 season was a special one for me.  That was the first year I was really obsessive about the Twins and was also my first exposure to a pennant race.  When the Twins traded for Speier that August (and for Pat Putnam a few days later), it was exciting to me to witness this new phenomenon of adding players for a playoff push.  As it turns out, neither move paid dividends.  Speier hit .212, Putnam hit .079, neither homered, and they combined for five runs batted in.  For Speier, it was a most insignificant blip on his 19 year big league career.  While Putnam was completely done, Speier went on to have a few more successful years as a utilityman for the Cubs and Giants.
Posted by Daniel Cote at 1:02 AM No comments: 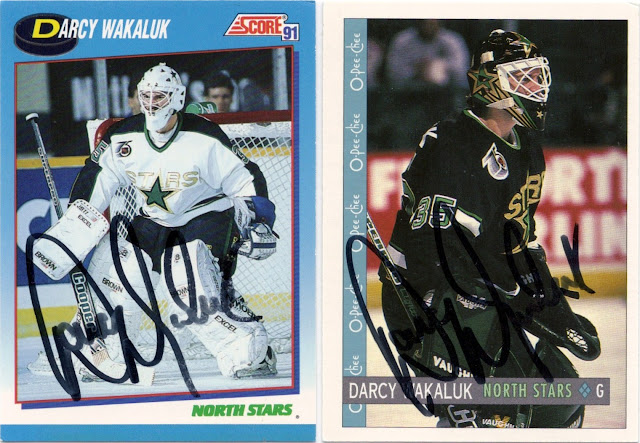 Notes:
Darcy Wakaluk came to the North Stars from the Buffalo Sabres organization following the Stars 1991 run to the Stanley Cup Finals.  After that season, the Stars' depth was gutted in the San Jose Sharks dispersal draft, and among the casualties was solid backup goaltender Brian Hayward.  Wakaluk, who a few years earlier became the first goalie in AHL history to score a goal, had a name befitting of a North Stars goalie (see Gump Worsley, Gilles Meloche, Cesare Maniago, Don Beaupre, Kari Takko, etc.) and was invaluable as Jon Casey's backup during the North Stars final two seasons in Minnesota.  He currently serves as the goaltending coach for the Calgary Hitmen of the Western Hockey League.

Posted by Daniel Cote at 1:46 AM No comments: 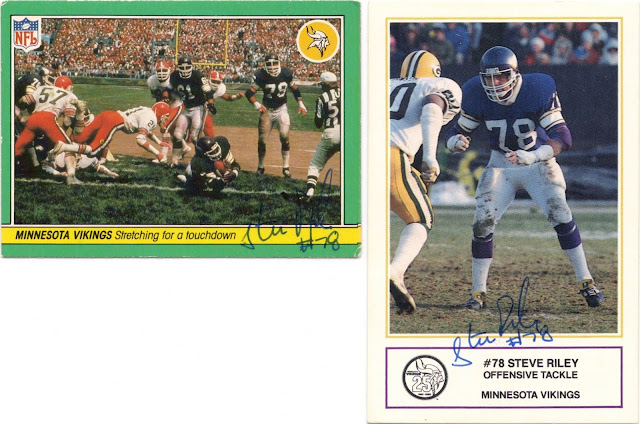 Notes:
Steve Riley was the Vikings first round pick out of USC in 1974.  For the next decade, he would be one of the anchors of the Vikes' offensive line.  The Vikings advanced to their third Super Bowl during Riley's rookie season.  Two years later, in 1976 (Riley's first season as a starter), they made it to the big game again.  Riley would play for another eight seasons, spending his entire career in Minnesota.
Posted by Daniel Cote at 12:50 AM No comments: 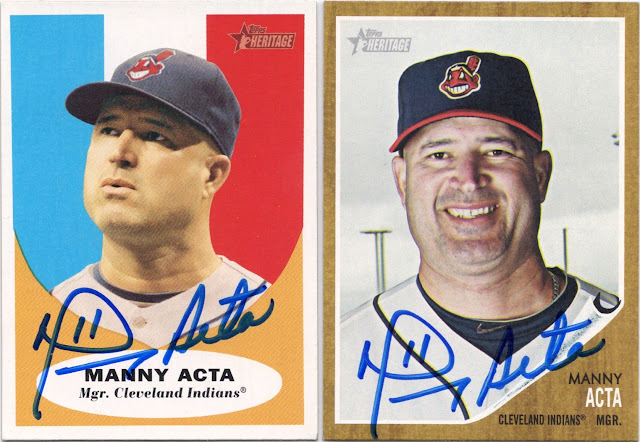 Notes:
Manny Acta has had a lock on the 2011 AL Manager of the Year award since the middle of April, when the surprising Cleveland Indians jumped to the front of the Central Division.  They have since regressed and are now hovering near the .500 mark, but their big gamble on new ace Ubaldo Jimenez and promotion of top prospects Lonnie Chisenhall and Jason Kipnis shows they're all in on this season.  A winning record at the end of the year should guarantee Acta the hardware.
Posted by Daniel Cote at 12:33 AM No comments: