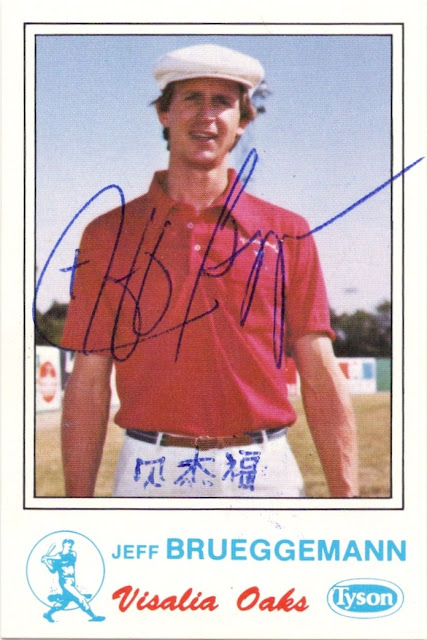 Notes:
The 1983 Visalia team set is now 19/25 complete!  Jeff Brueggemann was that club's General Manager.  He was drafted by the Twins in 1977 and spent a few seasons in the organization as a player before switching to the front office.  He has spent the last decade as Major League Baseball's "ambassador" to China, coaching and teaching the game to Chinese youth.  There's a pretty awesome story on his work that I found on Yahoo prior to writing him last June.  I highly recommend it.


Anyway, on to this wonderful return... it did take a while, but is worth the wait.  In addition to signing the card in both his English and Chinese signatures (!), he responded with a wonderful letter which was full of interesting information related to my quest.  He mentioned that there were 25 uncut sheets of this set of cards, and only 500-1000 were made.  His college teammate Dave Lyons was the rep from Tyson who helped coordinate the set.  Jeff also mentioned that his son is "playing in college and recruited highly this year.  Hopefully he will get drafted in June!"  (Further research finds that his son Kyle is a hard-throwing pitcher for the Army baseball team.)

And, finally, Jeff delivered sad news that Stan Holmes, who was the California League MVP for the 1983 Visalia team, passed away last month.  Holmes died at 52 from complications of liver and kidney failure.  Far too young.  I was lucky to get Mr. Holmes' signature on three cards, including his 1983 Visalia card, last August.  It was a generous act, and he will be missed.


Thanks for the great reply, Mr. Brueggemann.  We're on the home stretch now, needing only six more cards to complete the set!
Posted by Daniel Cote at 12:05 AM